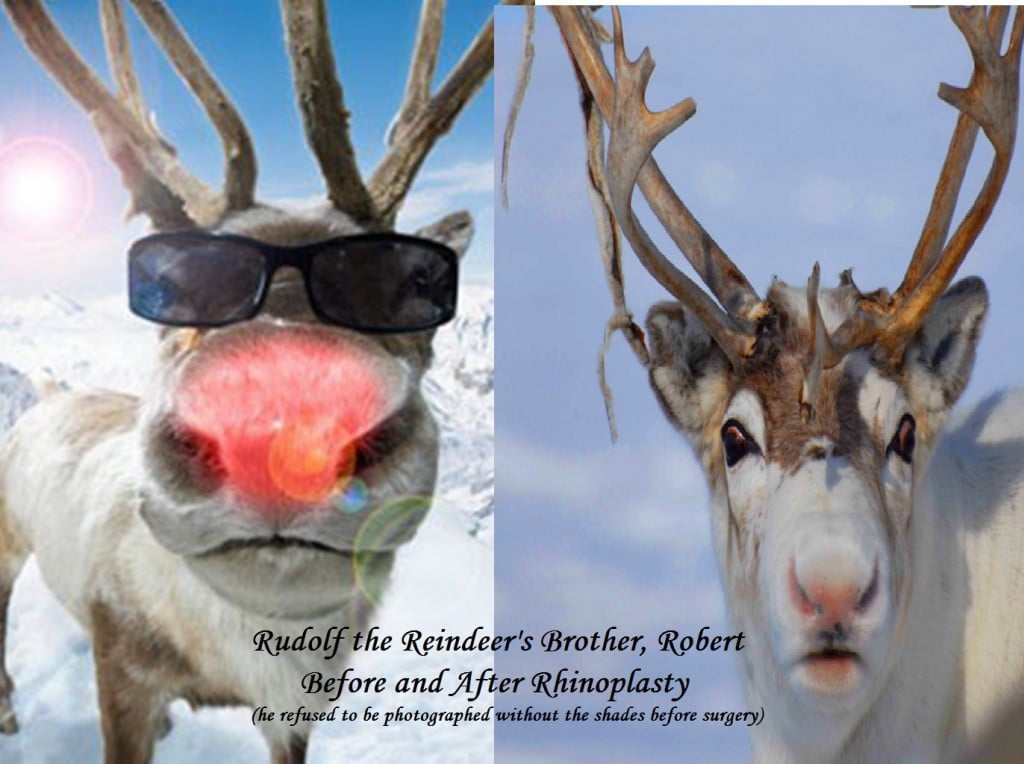 I bet you know the story of Rudolph the Red-Nosed Reindeer. Rudolf is famed for his red nose and leading other reindeer on a particular foggy night thus saving a doomed Christmas for all the children in the world! What you might not know, is about Rudolf’s siblings, Rodney, Robert, and Rebecca. All born with the genetic flaw of a bright glowing red nose, Rudolf’s unfortunate siblings were not among the North Pole reindeer chosen for the annual job of hauling Santa’s sled. This intervention by Santa undoubtedly compensated for the teasing Rudolf had experienced as a fawn when he was not allowed to join in all the reindeer games.

As noted in a scientific article published at Smithsonian.com, “A fraction of reindeer—the species of deer scientifically known as Rangifer tarandus, native to Arctic regions in Alaska, Canada, Greenland, Russia and Scandinavia—actually do have noses colored with a distinctive red hue.” It was the Greenland family that Rudolf and his family were unfortunately descended from. Fortunately, Rudolph’s good luck of being chosen by Santa allowed him to contribute to the family’s well being. How so you might ask. But think about the psychological effects of having a red nose!

Studies have shown that self esteem is improved by cosmetic procedures when sought with realistic expectations and forethought. Rhinoplasty in particular has been a cosmetic procedure patients have rated highly for raising their self esteem. For instance, a study of 200 patients in 1991 showed increased self-confidence and self-esteem as soon as one and six months after the rhinoplasty surgery. Another study in 2001 correlated dissatisfaction with body image to depression, particularly among patients who sought rhinoplasty (Philips). A study reported in 2011 verified improvement in mental health and physical self image after rhinoplasty (Samadzadeh, Abbasi, and Shahbazzadegan).

As with humans, so with reindeer it turns out! The small fortune Rudolf earned over the years allowed him to pay for his siblings’ nose jobs! It is true that they had to fly south for the surgery, but of course Santa lent Rudolf the sleigh for that. As you can see, Rudolf’s brother Robert had been the hardest hit. He generally wore sunglasses to hide his identity before his rhinoplasty claiming they helped with snow blindness.

While it is true that Dr. Branman did not work on this family of reindeer, he will perform rhinoplasty for you. Just give the office a call for your consultation to set it up. Merry Christmas everyone!