Do you wish you had longer, thicker eyelashes? Latisse could be a great option for you. Many myths surround this prescription product and board certified cosmetic surgeon, Dr. Rhys Branman, is here to clear up some of these misconceptions. To learn more, watch on KATV Channel 7’s Good Morning Arkansas series.

Announcer: From the station that’s on your side, this is Channel 7 News, good morning Arkansas.

Man: Coming up next, we’re going to be talking about Latisse with Dr. Rhys Branman. We’ll be right back after this.

Woman: Courtney is here joining us too.

Dr. Branman: Yes, wonderful Courtney is here. She’s going to be our model for today.

Woman: And she’s had Latisse so…

Dr. Branman: And she’s had Latisse.

Woman: …she’ll give us her kind of judgment on it, but first, what is it?

Dr. Branman: Latisse is a serum that is used to extend the eyelashes. It basically causes your eyelashes to grow longer. It was a product that was originally made for glaucoma, but they found that when the glaucoma patients were putting it in the eyes, their eyelashes got longer, they got thicker and there were more of them. And so they said, “Hey, this is something really interesting, let’s use this. Because a lot of women want to have longer, thicker eyelashes, let’s produce this product for eyelashes.”

And so what they do is they just put it on the edge of the eyelash, they don’t put it in the eye now. And it’s something you put on once a day and your eyelashes within weeks turn in thicker and longer.

Woman: Just in a matter of weeks.

Dr. Branman: In a matter of weeks, and so you can avoid all the eyelash extensions, all that stuff. Yeah so you don’t have to go through that whole process of someone sticking eyelashes on you. Your natural eyelashes grow right there with this product.

Woman: And if you’ve been doing mascara, that takes for…that’s like I think the longest thing in the morning is trying to get a lot of mascara on. Have you enjoyed this, Courtney?

Courtney: I love the product.

Courtney: It’s just very easy. There’s no down time, there’s nothing…you just put it on before you go to bed at night and you don’t feel it and wake up and your lashes are growing. The first week, I noticed it.

Woman: Really, in a week’s time?

Woman: And you’re a busy mom. You don’t have time for all that other stuff.

Courtney: I don’t have time. I can’t maintain those eyelash extensions which I loved, but Latisse is great.

Dr. Branman: It’s a great product and we are actually…it’s a prescription so we’re selling it through the office. And the patients just comes in, we talk to them briefly about the product, we show them how to put it on and then they go out and they’re off and running with longer lashes.

Woman: With longer lashes and in a matter of weeks. I think we maybe have a picture as well of some before and afters and I know that you’ve seen this in the office quite a bit. That’s a look at what it can do.

Dr. Branman: Absolutely, and that’s a real picture. It really does work that well.

Woman: No mascara enhanced or anything.

Dr. Branman: No mascara enhancer at all.

Woman: Okay, so you’re going to apply it to Courtney to show us how to use this.

Dr. Branman: So essentially, basically you come with a set of brushes. You put just one drop right here onto the brush, and then all you’re doing is you’re really just putting it right along the lash line just along, just like that. And it’s that simple.

Dr. Branman: That’s it. One brush per eye per day. You’re done.

Woman: Okay. Would you do it on the lower lashes?

Dr. Branman: People don’t recommend it for the lower lashes, but people do use it, but it’s more of an off label.

Woman: Alright. We’ve talked about all of the facts. Let’s talk about the myth that’s out there.

Dr. Branman: There’s a myth that it would change your eye colors from blue to brown. Now when they’re using this as a cosmetic product, they’ve not seen any cases of that. It was really…they saw that a few cases when they’re actually putting it in the eye. So we’re putting it on the outside of the eye, you know, eyelid, and we’re not really seeing that at all now.

Woman: That’s good. When it was used for glaucoma, it was going in the eye.

Dr. Branman: It’s going in the eye, but now it’s not. It’s staying completely out of the eye.

Woman: Okay. You suggest that someone be under a doctor’s care when they’re using this though.

Dr. Branman: Yes, I believe that’s important with any medication. And we’re offering a special on it.

Woman: Yeah, let’s talk about that.

Dr. Branman: So if you buy a 5CC of one of these big boxes, five mil, you get a three mil free.

Woman: Yeah, it’s the perfect stocking stuffer. And guys, I mean any woman in your life would love this and especially if she’s been complaining and saying, “Oh you know, I don’t have any lashes.” And when we age, that tends to happen, right?

Dr. Branman: That is one of the consequences of getting a little bit older.

Woman: Exactly, that our lashes just don’t grow as long and pretty. So, yours look fantastic.

Woman: And it’s made life a lot easier…

Woman: …to get ready every morning.

Woman: Okay, very good. Do you have some other specials going on?

Dr. Branman: We do. We have discounts on our fillers, Restylane, Botox and all the other ones that we have. We also have some…our breast special lever is really kicking in high gear, 3,900 for [inaudible 00:04:52] and 4,900 for silicone. It’s a great time of year to, you know, take advantage of all those specials.

Woman: Yeah, and guys I think if your spouse or someone who’s thought about it but they’re afraid to take the step to do something like this, you do it for them. And then they’ll be happy that you did.

Dr. Branman: Yeah no, it’s a great time of year for that.

Woman: Okay, let’s put up the information of course about Cosmetic Surgery Center. You can go online as well and check out all the special offers and deals. But there they are, in Executive Center Drive in Suite 100 and also there’s the website as well. And yes you did see them on “Good Morning America” last week, right?

Dr. Branman: Yeah, we’re all there cheering, it was actually a lot of fun.

Woman: Had a good time.

Woman: Well Merry Christmas to both of you all.

Dr. Branman: Merry Christmas to you too and thank you. 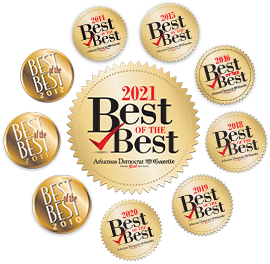